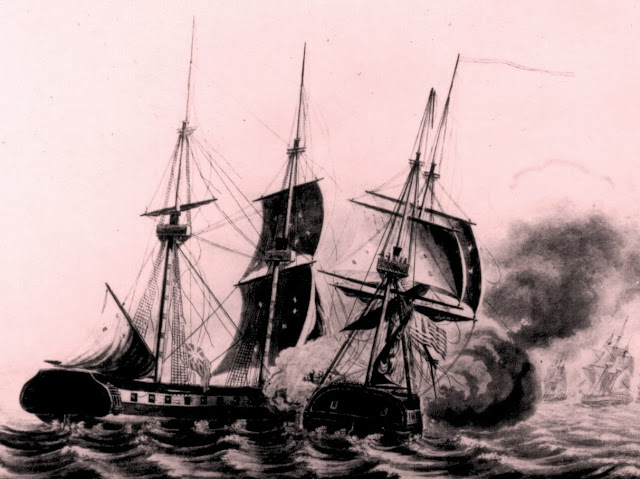 The sloop-of-war Wasp, 18 guns, Captain Jacob Jones, thoroughly manned and equipped, carrying sixteen 32 pound carronades and two long 12-pounders, with two small brass cannons in her tops, left Jones saw several sail of vessels, and ran parallel with them until the dawn, when he discovered that it was a fleet of armed merchant-vessels convoyed by the British sloop-of-war Frolic, Captain T. Whinyates, mounting sixteen 32pound carrouades, two long 6-pounders, and two 12-pounder carronades on her forecastle. She was manned by a crew of one hundred and eight persons.

It was Sunday morning, Oct. 18, in latitude 37° N., and longitude 65° W. The Frolic took a position for battle so as to allow the merchantmen to escape during the fight. A severe engagement began at half-past ten in the morning. Within five minutes the main top gallant-mast of the Wasp was shot away and fell among the rigging, rendering a portion of it unmanageable during the remainder of the action. Three minutes afterwards her gate and main topmast were shot away, and at twenty minutes from the opening of the engagement every brace and most of the rigging were disabled. Her condition was forlorn. But while the Wasp was thus suffering, she had inflicted more serious injury to the hull of the Frolic.

The two vessels gradually approached each other, fell foul, the bowsprit of the Frolic passing in over the quarter-deck of the Wasp, and forcing her bows up in the wind. This enabled the latter to give the Frolic a raking broadside with terrible effect. With wild shouts the crew of the Wasp now leaped into the entangled riggings and made their way to the deck of the Frolic. But there was no one to oppose them. The last broadside had carried death and dismay into the Frolic, and almost cleared the deck of effective men. All who were able had escaped below to avoid the raking fire of the Wasp. The English officers on deck, nearly all of them bleeding from wounds, cast their swords in submission before Lieutenant Biddle, who led the boardingparty. He sprang into the rigging, and with his own hand struck the colors of the Frolic. The contest lasted forty-five minutes, and the aggregate loss of the Frolic in killed and wounded was ninety men. The Wasp had only five men killed and five wounded. Jones placed Lieutenant Biddle in command of the Froljc, with orders to take her into Charleston, S. C., and when they were about to part company the British ship-of-war Poictiers, 74 guns, Captain J. P. Beresford, bore down upon them. The Wasp and her prize were not in a condition to flee or fight, and within two hours after he had gained his victory Jones was compelled to surrender both vessels.

They were taken to Bermuda, where the American prisoners were exchanged. The victory of the Wasp over the Frolic caused much exultation in the United States. Jones was lauded in speeches and songs. The authorities of New York voted him a sword and the "freedom of the city." Congress voted him thanks and a gold medal, and appropriated $25,000 to Jones and his company as compensation for their loss of prize - money. A silver medal was given to each of his officers. 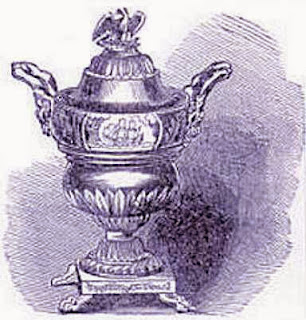 The captain was promoted to the command of the frigate Macedonian, captured from the British by Decatur. The Legislature of Pennsylvania voted command of the Hornet sloop-of-war. This victory was celebrated by songs, and also by caricatures. One of the songs became very popular, and was sung at all public gatherings. In it occurred the following lines:

The foe bravely fought, but his arms were all broken,


And he fled from his death-wound aghast and affrighted;


But the Wasp darted forward her death doing sting,


She pierced through his entrails, she maddened his brain,


And he writhed and he groaned as if torn with the colic;


And long shall John Bull rue the terrible day


He met the American Wasp on a Frolic."

Among the caricatures was one by Charles, of Philadelphia, of which a reduced copy is here given. Under it Avere the following words: 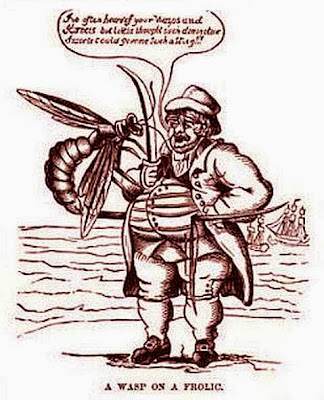 A Wasp took a Frolic and met Johnny Bull,


Who always fights best when his belly is full.


The Wasp thought him hungry by his mouth open wider


So, his belly to fill, put a sting in his side. 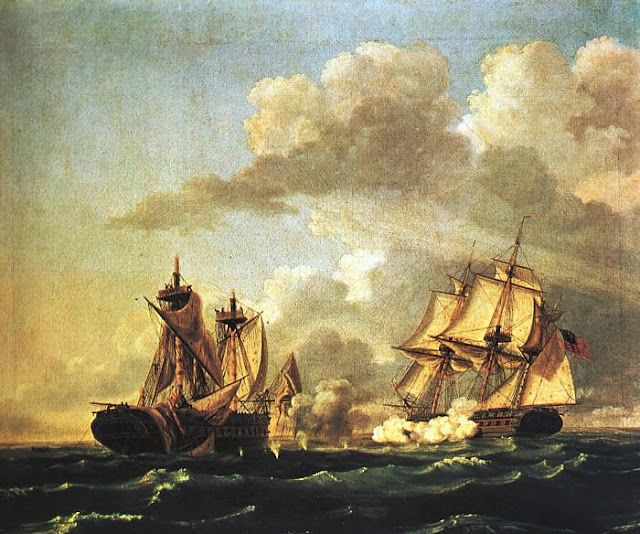 The  United States and Macedonian. Commodore Rodgers sailed from Boston (Oct. 10,1812) in the President, accompanied by the United' States, 44 guns, Captain Decatur, and the Argus, 16 guns, Lieutenant-commandant Sinclair, leaving the Hornet in port. The President parted company with her companions on Oct. 12, and, on the 17th, captured a British packet. The United States and Argus also parted company, the former sailing to the southward and eastward in search of British West India men. At dawn, on Sunday morning, the 25th, the watch at the maintop of the United States discovered a sail to windward—an English ship-of-war. Decatur spread all his sails and gave chase, and, as the United States drew nearer and nearer the British ship, such loud shouts went up from her decks that they were heard on board the vessel of the enemy. At about nine o'clock in the morning, Decatur had got so near that he opened a broadside upon the strange vessel, with much effect. It was responded to in kind, both vessels being on the same tack. They continued the tight by a heavy and steady cannonade with the long guns of each, the distance being so great that carrouades and muskets were of no avail.

In the course of half an hour the British vessel was fearfully injured, and her commander, perceiving that her only safety from destruction was to engage in close action, drew up to the United States for that purpose. The latter, with splendid gunnery, sent shots which cut her enemy's mizzeuinast so that it fell overboard. Very soon her main and fore top-masts were gone aud her fore-mast was tottering. No colors were seen floating over her deck. Her main - mast was severely damaged, while the United States remained almost unhurt. Decatur bore away for a while, and his antagonist, supposing his vessel, badly crippled, was withdrawing, set up an exulting shout. To their astonishment the United States tacked and brought up in a position of greater advantage than before. The British commander, perceiving that longer resistance would be useless, struck his colors and surrendered.

The captured vessel was the British frigate Macedonian, 38 guns, Captain J. S. Carden. She had received no less than one hundred round-shot in her hull, many of them between wind and water, and she had nothing standing but her fore and main masts and fore-yard. All her boats were rendered useless but one. Of her officers and men—three hundred in number-—thirty-six were killed and sixty-eight were wounded. The loss of the United States was rive killed and six wounded. The Macedonian was a new ship, and though rated at 38, carried 44 guns. The action occurred not far from the Island of Madeira. After the contest, Decatur returned to the United States, arriving off New London Dec. 4, 1812.

The Macedonian, in charge of Lieutenant Allen, arrived at Newport harbor at about the same time. At the close of the month both vessels passed through Long Island Sound, and, on the 1st of January, 1813, the Macedonian was anchored in the harbor of New York, where she was greeted as "a New-year's gift." "She comes with the compliments of the season from old Neptune," said one of the newspapers. The boys in the streets were singing snatches of a song:

Then quickly met our nation's eyes,


The noblest sight in nature,


A first-rate frigate as a prize, 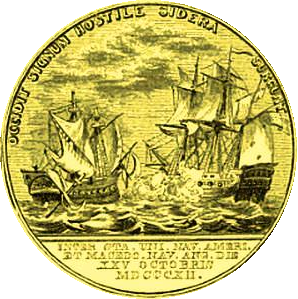 Legislatures of states gave Decatur thanks, and two of them each gave him a sword. So, also, did the city of Philadelphia. The authorities of New York, in addition to a splendid banquet to Hull, Jones, and Decatur (January 7, 1813), gave the latter the freedom of the city and requested his portrait for the City Hall. The National Congress thanked him and gave him a gold medal.

Book a primary source exhibit and a professional speaker for your next event by contacting Historic.us today. Our Clients include many Fortune 500 companies, associations, non-profits, colleges, universities, national conventions, pr and advertising agencies. As the leading exhibitor of primary sources, many of our clients have benefited from our historic displays that are designed to entertain and educate your target audience. Contact us to learn how you can join our "roster" of satisfied clientele today!

Primary Source exhibits are available for display in your community. The costs range from $1,000 to $35,000 depending on length of time on loan and the rarity of artifacts chosen.

No Taxation Without Representation

US Bill of Rights

*Republican Party - - is a defunct political party organized by Thomas Jefferson and James Madison in 1791. The Party went out of existence over the schism between John Quincy Adams and Andrew Jackson (both Republican candidates) over the Presidential election of 1824. Today, for the sake of expediency, political scientists incorrectly refer to it as the Democratic-Republican Party. Party members throughout its existence never utilized the name “Democratic-Republican.”

*** President of the Confederate States of America